Distance no problem for ziplining student

Mike Seper is one of thousands starting the semester at the University of Alaska Fairbanks. Like more and more of his classmates, though, he has never been to Fairbanks.

You’ll find Seper, an MBA student, an hour and 20 minutes west of St. Louis in a small trailer office, which acts as the gateway to a mile-long course of cables zigzagging through Missouri’s infamous hills. “I always knew I wanted to own my own business,” he said, “but wasn’t sure what it would be.” In 2010 it became clear, and he opened Eco Zipline.

Since then, Seper has built the award-winning business from the ground up — 225 feet into the treetops, to be precise. Though the surrounding area hasn’t been known for tourism, Seper saw potential in the deep ravines and, having grown up in St. Louis, felt there weren’t enough outdoor activities for Missourians.

Customers, who have contributed nearly 600 “excellent” reviews on TripAdvisor, have noticed his attention to detail. Guides pause to take group photos throughout the course and tell interesting stories about the wildlife and vegetation in the area. Everyone even gets a popsicle on tarctihe way out.

However, several of Seper’s own creations are what make Eco Zipline unique. That ingenuity is also what led him to study at a distant university, saying UAF’s strong reputation for innovation and entrepreneurship are what led him there in the first place. 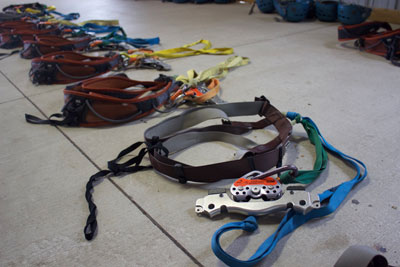 This brake system, designed by Mike Seper and only used at Eco Zipline, will be an entry in this year’s Arctic Innovation Competition at UAF.

One signature aspect of the Eco Zipline experience is something amateur guests won’t even notice. The brake system is a Seper invention that lets riders pull on a hanging strap to decelerate rather than grabbing onto the zipline itself. This reduces sound pollution and physical strain on the rider, as proven by the 95-year-old guests who have conquered the advanced 10-line tour that reaches speeds of up to 40 miles per hour.

The brake design also features front and back camera mounts. Guests can add a GoPro rental to their adventure and take home an SD card with their photos and video. Next season, Seper plans to use both mounts and wide-angle lenses to capture 360-degree views that can be turned into take-home virtual reality experiences.

“You can turn as the person watching and see what it looks like behind the person as they’re zipping, in front of them, look up, look down,” he said. “I just think it’s going to be a really neat technology to implement.”

The brake system is one of two inventions Seper is entering in UAF’s Arctic Innovation Competition this year (UPDATE: Seper is a finalist). He had hoped to make his first trip to Fairbanks if his ideas make it to the final round in October, but the competition coincides with a busy week at home. He and his wife, who helps run the Eco Zipline office, are expecting a baby.

Though his classmates are miles away in every direction, technology makes it easy for them to share ideas and help each other grow in their careers, he said. This fall, he will continue as president and treasurer of the College Entrepreneurial Organization and then graduate with his MBA in December. He plans to further pursue those areas as a doctoral candidate next year.

“Even though my business is different, the lessons learned from owning a business, whatever it may be, go hand in hand with what I’m doing,” he said.