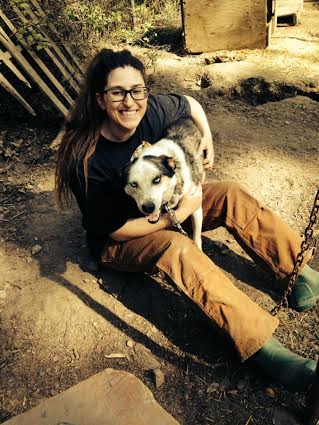 ang’s life is consumed by one goal: finishing the Yukon Quest. For now, she’s a dog handler, scooping poop, putting on booties, cutting meat and performing minor vet care. She’s also a full-time student at the University of Alaska Fairbanks.

Eight years ago Lang, now 21, was living in New Jersey when she read Into the Wild. Jon Krakauer’s story hooked her on Alaska and she traveled to Fairbanks the following year, witnessing her first Yukon Quest. “That’s when I fell in love with dog mushing,” she says, “I knew this is where I wanted to be.” The day after high school graduation, knowing no one in Alaska, she moved to Fairbanks and began working toward her goal.

Because the world of dog mushing is unpredictable, Lang added “earn a degree” to her to-do list. Unwilling to take time off from working as a handler and volunteering at races across the state, Lang was in search of a flexible program and found it in UAF’s Justice department. She will graduate in May with a bachelor’s degree.

“The Justice program is online, which I love, and there are always going to be jobs in the field,” she says, adding that the captivating courses and instructors confirmed her choice. Though she’d enjoy working in the court system, her priority remains mushing.

Trying to get on a sled as fast as possible, she is on track to finish her four-year degree in three years. “The dogs are my motivation,” says Lang, who takes 18 to 21 credits every fall and spring and six to 12 credits every summer.

Having most of her classes online gives Lang the control she needs to succeed at UAF and be an active dog handler. “Most of my courses don’t require you to sign in at a certain time so I’m able to get two or three weeks ahead if I want,” Lang says. “If I know I’m going to be helping someone with an upcoming race or will be out of town for a few days, I can do it without falling behind.”

Moving forward is really the only thing she knows how to do. Just this month, she married fellow mushing enthusiast Adam Lang and was hired by an Iditarod and Yukon Quest veteran musher in Fox, Alaska. She is working part-time during her last semester and will transition to full-time after graduation. “I’m working hard but also following and trusting in God’s plan for the future,” Lang says. It won’t be long now before she’s crossing the finish line of the Yukon Quest.

This article was originally posted on January 20, 2015.